Mr. Nithindas K. visited our portal on May 23, 2019, at 02:55 p.m. and filed a complaint against OyoRooms for not providing the full refund. On receiving the complaint immediate actions were called regarding this issue. We sent an email to the company and started a social media campaign. On the very same day at 11:21 p.m. Mr. Nithindas again visited Voxya an online consumer complaint forum and marked the complaint as resolved.

Our client Nithindas K. had booked a hotel in Ooty through Oyo Rooms. About 30 minutes later, our client got a mail that his booking has been cancelled due to some issues and the full refund will be processed. Our client had booked a room for a total of Rs. 3758 but only Rs 2819 were refunded in his account. Seeing this our client felt cheated as he had been promised a full refund and decided to raise a voice against Oyo Rooms and that’s when he landed on our portal. Our client then filed a complaint against OyoRooms at our portal and requested us to help him get his money back.

After getting frustrated that the full refund was not being provided by OyoRooms, Mr. Nithindas K. was left frustrated with their services and decided to file a complaint against OyoRooms at our portal. We looked into the matter and started a social media campaign as soon as we received the complaint. The campaign was spread all over social media like Facebook, Twitter, Instagram, etc. We also sent an email to Oyo Rooms requesting them to resolve the matter as soon as possible. Soon our client received a call from OyoRooms and they agreed for a full refund and the complaint was marked as resolved on 23rd May 2019 at 11:21 p.m.

“The amount has been refunded by OYO. Thanks for your service. I rate it excellent.” 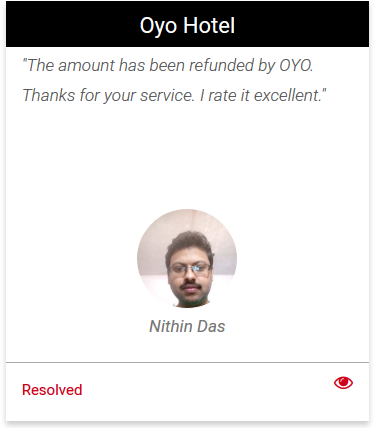 Are you also looking for a solution of consumer complaint?