Timeline :
Mr. Rohit Kumar filed a complaint at Voxya, an online consumer complaint forum on 2nd June 2019 at 11:06 a.m., against Swiggy. As soon as we received the complaint, immediate actions were taken to resolve the issue. We sent an email to the company and also started a social media campaign. After a few days i.e. on 4th June 2019 at 06:57 p.m., Mr. Kumar again visited our portal and marked the complaint as resolved.

A brief look into the consumer complaint :
Our client Mr. Rohit Kumar had ordered Paya Nihari Soup from Swiggy on 29th May at 8:15 p.m. But on opening the delivered food our client was shocked to the core. The box had a rotten smell and the food received was completely stale and spoiled and simply uneatable. Mr. Kumar immediately raised a complaint in the help desk section of Swiggy but they kept providing him with ambiguous answers. Moreover, a couple of days later, Mr. Kumar was shocked to see that his complaint had been marked as closed without clearly his query. This was the final nail in the coffin as after getting frustrated with their automated responses, Mr. Kumar decided to file a complaint against Swiggy at Voxya online consumer complaint forum and requested us to help him in resolving the issue.

The resolution provided by us:
After getting fed up of not getting a proper resolution for his complaint even after constant reminders, Mr. Rohit Kumar decided to file a complaint against Swiggy at Voxya. We looked into the matter and started a social media campaign as soon as we received the complaint. The campaign was spread all over social media like Facebook, Twitter, Instagram, etc. We also sent an email to Swiggy requesting them to resolve the matter as soon as possible. Soon our client received a call from Swiggy and the complaint was marked as resolved on 4th June 2019 at 06:57 p.m.

“Thank you Voxya. Your efforts and help towards society and people like us are appreciated.” 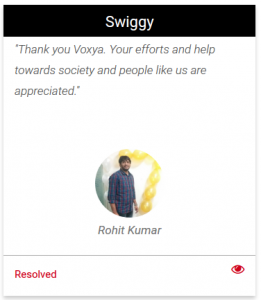