Timeline :
On 14th March 2019 at 11:56 a.m., Mr. Mohammed Siraj Ali filed a complaint at Voxya consumer complaint forum against Jasper Industries. As soon as we received the complaint, immediate actions were taken to resolve the issue. We sent an email to the company and also started a social media campaign. We also sent a legal notice to Jasper Industries as our client wanted this case to move legally. About a month later, on 26th April 2019, Mr. Siraj Ali again visited our complaint forum at 09:45 a.m. and marked the complaint as resolved.

A brief look into the complaint :
Our client Mr. Mohammed Siraj Ali had purchased a Tata Ace Gold from LB Nagar showroom on 19th February 2019. A couple of days later, Mr. Siraj Ali found out that the chassis number is not matching on track with the one on the vehicle. On informing the sales head of the company about this, they promised to get the vehicle registered within 3-4 days. But more than a month had passed by and still, there was no response from them. Moreover, Mr. Siraj had taken this vehicle on EMI and the Tata motors team assured him that the EMI will only be deducted once the vehicle has been registered, however, to our client’s shock the EMI had already started getting debited. Our client grew frustrated with them, as the vehicle was just lying in his garage while the EMI was getting debited. Mr. Siraj immediately decided to file a complaint against Jasper Industries at our portal and requested us to help him in resolving the issue.

The resolution provided by us:
After getting fed up of waiting to get his vehicle registered even after constant reminders, Mr. Siraj decided to file a complaint against Jasper Industries at our portal. We looked into the matter and started a social media campaign as soon as we received the complaint. The campaign was spread all over social media like Facebook, Twitter, Instagram, etc. We also sent an email to Jasper Industries requesting them to resolve the matter as soon as possible. Moreover, we sent a legal notice to Jasper Industries and demanded them to offer a resolution to our client. Soon our client received a call from Jasper Industries and the consumer complaint was marked as resolved on 26th April 2019 at 09:45 a.m.

Mr. Mohammed Siraj Ali Testimonial for Voxya
“A big and a loud thank you to Voxya. I was in doubt whether my vehicle will get registered or not. It was not possible to get this done without you people.” 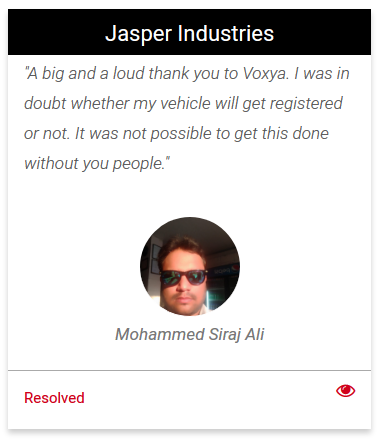