Mr. Sushil Mathews filed a complaint at Voxya online consumer complaint forum on 6th March 2019 at 11:26 a.m., against Hathway Broadband. As soon as we received the complaint, immediate actions were taken to resolve the issue. We sent an email to the company and also started a social media campaign. After a few days, on 20th March 2019 at 11:55 a.m., Mr. Mathews again visited our portal and marked the complaint as resolved against Hathway Broadband.

A brief look into the consumer complaint :

Our client Mr. Sushil Mathews kept getting calls from Hathway Broadband that if he makes an advance payment for the next 3 months, then he will get a wireless camera for free. As this sounded like an intriguing option, our client decided to ahead with this offer and made the advance payment. However, as soon as the money was received by the company, they started ignoring his calls and e-mails and kept transferring his calls to another department and provided no resolution. Mr. Mathews even threatened to leave their services if no camera was provided but to no avail. After getting frustrated with them, Mr. Mathews decided to file a complaint against Hathway Broadband at Voxya consumer complaint portal and requested us to help him in resolving the issue.

After getting fed up of not getting a proper resolution for his complaint even after constant reminders, Mr. Mathews decided to file a complaint against Hathway Broadband at our portal. We looked into the matter and started a social media campaign as soon as we received the complaint. The campaign was spread all over social media like Facebook, Twitter, Instagram, etc. We also sent an email to Hathway Broadband requesting them to resolve the matter as soon as possible. Soon our client received a call from Hathway Broadband and the complaint was marked as resolved on 20th March 2019 at 11:55 a.m.

Mr. Sushil Mathew’s Testimonial for Voxya
“With Voxya I was able to handle a very difficult company. Thank you Voxya for helping me realize the power of consumer to speak up and get action!” 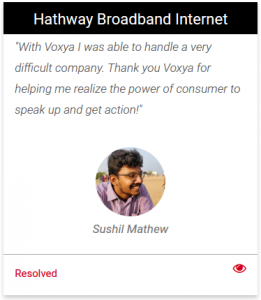