On 11th April 2019 at 09:53 a.m., Mr. Tcs Prasad filed a complaint at our portal against SpiceJet airlines. As soon as we received the complaint, immediate actions were taken to resolve the issue. We sent an email to the company and also started a social media campaign. On the very next day i.e. on 12th April 2019, Mr. Prasad again visited our portal at 09:08 a.m. and marked the complaint as resolved.

Our client Mr. Tcs Prasad had booked two round tickets from Hyderabad to Madurai (from 18-03-19 to 21-03-2019) through SpiceJet. However, the flight got cancelled due to operational problems and SpiceJet promised that the full amount refund would be provided within 15-20 days. But even after waiting for 25 days no refund was provided to our client. Our client continuously reminded them about the refund but all he did get were automated email responses. After getting frustrated with them, Mr. Prasad decided to file a complaint against SpiceJet at our portal and requested us to help him in resolving the issue.

After getting fed up of waiting for a refund even after constant reminders, Mr. Tcs Prasad decided to file a complaint against SpiceJet at our portal. We looked into the matter and started a social media campaign as soon as we received the complaint. The campaign was spread all over social media like Facebook, Twitter, Instagram, etc. We also sent an email to SpiceJet requesting them to resolve the matter as soon as possible. Soon our client received a call from SpiceJet and the consumer complaint was marked as resolved on 12th April 2019 at 9:08 a.m. 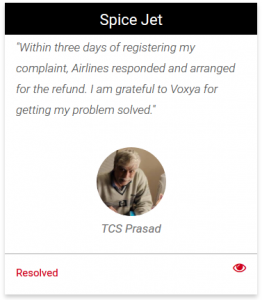 “I was frustrated when I could not get any positive response from my airlines regarding the delay in refund of money due to cancellation of flight by the airlines. Within three days of registering my complaint, airlines responded and arranged for the refund. I am grateful to Voxya for the help they had extended in getting my problem solved.”