Mr. Raunak Surana visited our portal on 29th October 2018 at 9:46 a.m. and filed a complaint against Swiggy for delivering a wrong product and of substandard quality. We immediately took action against this matter and started the social media campaign straight away. Within an hour of posting this complaint, our client soon received a call from Swiggy and marked his complaint as resolved on 10:34 a.m on the very same day.

Our client Mr. Raunak had ordered a Rasgulla from the Swiggy app, but due to its unavailability, the order was somehow changed to Ledikeni. Since our client did not want to go through the trouble of replacing it and wasting his time he decided to eat what’s in front of him. However, to our client’s shock, the order which was delivered had a very foul odour and the taste was also of substandard quality. So Mr. Raunak decided to exchange the order and this time he ordered two Rasgullas and paid Rs. 40 for it as Swiggy assured him that later they would compensate for the previous order. Moreover, the jar containing the Ledikini was also picked up by the delivery boy. But Swiggy refused to compensate for this order and decided to charge him for both the orders. This was another shock for our client as he was a regular Swiggy user and didn’t expect such bad customer service.

After getting fed up of contacting Swiggy customer service who didn’t provide him with any fruitful solution, Mr. Raunak decided to file a complaint on our portal. We looked into the matter and started a social media campaign as soon as we received the complaint. The campaign was spread all over social media like Facebook, Twitter, Instagram etc. We also sent an email to Swiggy requesting them to resolve the issue as soon as possible. Within an hour of posting the complaint, our client received a call from Swiggy who resolved his complaint and also gifted him discounted coupons.

“I have been satisfied with the service provided by Voxya. My issue was resolved within hours of posting my complaint. Thank you voxya” 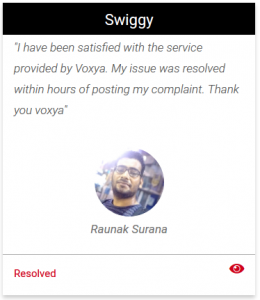 Be aware of food safety

Due to such a competitive market, many restaurants try to lure us into buying their food by placing a very attractive discount coupon which then catches the attention of the user. People should be wary of these things as most of the times they put an attractive price but deliver way below standard food or sometimes even different food items from what they ordered. Many such cases have been reported on our portal wherein they have received different food products or even received non-veg food instead of veg.
We should always check the reviews and ratings of the restaurant that we are ordering from. Most people share their previous experiences as feedback and reviews which are very helpful for other customers. Moreover, we should also read the refund/replacement policy of the platform that we’re ordering from.